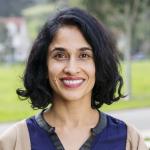 Anagha became deputy campus counsel for the University of California San Francisco in February 2022. Prior to this, she worked in the University of California system for nearly six years as principal counsel in the UC Office of the President. While there, she served as a strategic legal adviser to campus leaders on complex land use, real estate and business transactions, and collaborated with stakeholders both within and beyond the UCSF campus on large, often controversial projects. She comes from Wendel, Rosen, Black & Dean where she was a Land Use and Real Estate Partner from 2008. At Wendel, she counseled clients on planning, zoning and environmental laws while creating strategies and relationship building within stakeholder groups to obtain support and approval for complex projects. Prior to this, Anagha was a Law Clerk to Honorable Consuelo Marshall at the U.S. District Court and an Associate at Heller Ehrman.