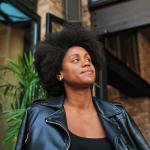 Shakirah Simley is a writer, seasoned organizer, and community development and policy strategist with over fifteen years of experience working on social justice, gender and racial equity issues. She is the Executive Director of the Booker T. Washington Community Service Center, one of SF's oldest Black-led and serving community-based organizations, and home to some of the only permanent supportive affordable housing for transitional aged youth in SF. Shakirah has proven track record of public service, having previously served as the inaugural Director for the Office of Racial Equity for the City and County of San Francisco, served as a legislative aide for the SF Board of Supervisors, and the leader the Southeast Community Center in Bayview. She is a graduate of the University of Pennsylvania and a Fulbright Scholar to Italy. She serves as a Board member for the Alliance for Girls and FoodWise (formerly CUESA). She is a former food artisan and forever food justice advocate. She has been featured in local and national publications including the SF Chronicle, KQED, New York Times, Eater, Bon Appetit and National Geographic. The daughter of a social worker and granddaughter of a Black Panther, Shakirah was born in raised in Harlem, New York. Shakirah has lived in San Francisco for over 13 years, working to change access and opportunity for low-income communities and generations of young people to come. Shakirah lives in the Western Addition with her husband and foster kittens.